The plans for a gigantic new hotel with its own casino had already been put on paper in 2007, but only now has the owner, the Seminole Tribe of Florida, been given the “green light” by the city. At the equal “opening ceremony” with fireworks and a specially hired guitarist, the building project was presented to the general public. The design of the hotel, which is bursting with ostentation and pomp, should also set new standards. The hotel tower is constructed in the form of a huge back-to-back guitar and soars 137 meters high into the sky. The guitar was obviously chosen because it is the company's trademark. Attached to the said tower is a 4000 square meter lagoon-like resort including private villas and a pool complex. The builders see the building as a landmark, which should be mentioned in the same breath as the Leaning Tower of Pisa, the Eiffel Tower, and the Sydney Opera House. The Hard Rock Hotel Casino will have a total of 638 rooms and suites that are at least 49 square meters in size. In addition, there will be a pool tower, which will extend over seven floors and will provide a further 168 rooms. Of course, in such a luxury building, in addition to high-quality restaurants, bars, lounges, and a business center, an appealing spa area should not be missing. This will cover around 3800 square meters and, in addition to beauty treatments, will also provide saunas, various pools, and jacuzzis. 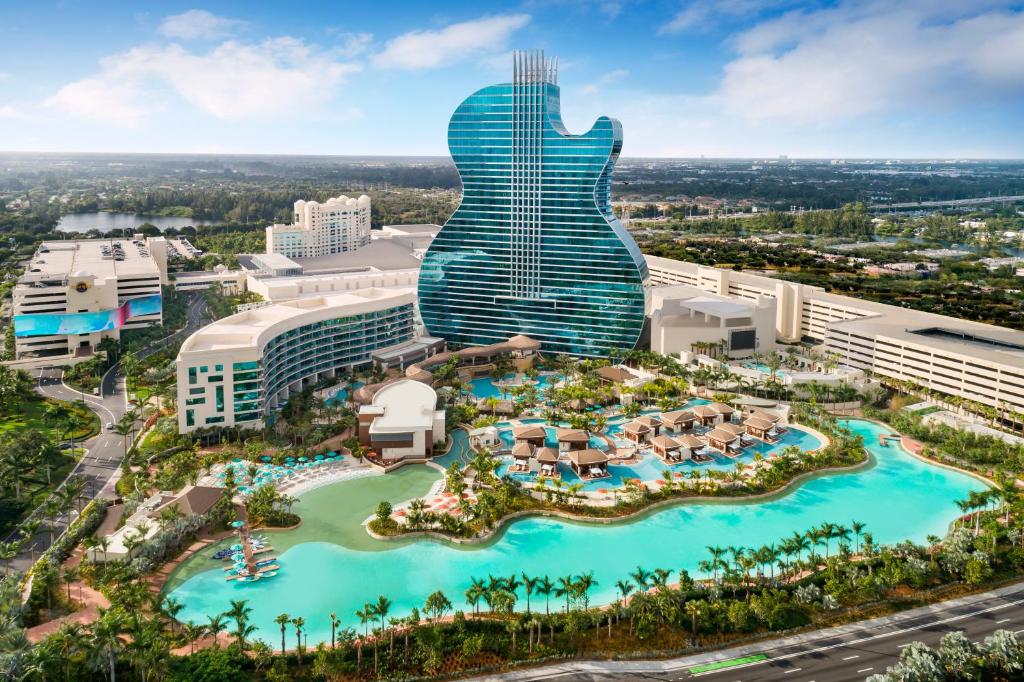 Is the casino area really the largest in the world?

As already mentioned, the complex will function as a hotel-casino, which means that a separate casino area will be integrated here. According to the Seminoles and the Chairman of Hard Rock International James F. Allen, the Hard Rock Hotel & Casino is said to be " one of the largest and most extensive casinos in the world ". Believe it or 3267 machines available to guests willing to gamble. But fans of the popular card games blackjack and poker as well as roulette lovers will get their money's worth here at over 175 gaming tables. Since poker is one of the most popular games of all, the operators have come up with something very special. It's a separate poker room planned, which is to be over 1,600 square meters. With numbers like this one understands why the construction project can also be called a record casino.

The Seminole Tribe of Florida is the owner

In addition, the tribe owns several casinos under the name "Seminole Casino" in the state of Florida and also two Hard Rock Hotels in Hollywood and Tampa. With the building permit now issued for the new mega-hotel-casino, the Seminole will probably be able to build a monopoly on the gaming industry in the state of Florida, as it will be very difficult to outdo this gigantic mega-complex.In contrast to the name “Hard Rock Cafe”, however, “Seminole” should not be a term for many. In fact, the operator Seminole is an Indian tribe from the USA who are based in Florida and have been recognized by the state since 1957. Like many other indigenous people, they had to fight the white settlers back then and are still the only tribe that has never signed a peace treaty. In the meantime, the Seminole have developed culturally and financially and offered various shows and alligator wrestling on their website in addition to swamp tours.